Athena’s is the dream of Jennifer Jolicoeur, the very first adult toy party planner in Rhode Island almost 30 years ago! Jennifer started with humble beginnings and launched her business from her 3 room apartment in Rhode Island. Her vision was to make sex toys accessible while encouraging discussions about their benefits. She conducted hundreds of educational and entertaining parties each year all over New England.

After 5 years of building an extremely successful and profitable home party business, she set out to create her very own company – one that worked as a family unit with its distributors – a company with a mission to change the world, one orgasm at a time. In 1998, Athena’s Home Novelties was born.

Based in Woonsocket, RI, Athena’s is one of the country’s premier adult novelty party plan companies with over 1,000 active Goddesses and Adoni operating in 44 states across the country. In addition to sexual empowerment, Athena’s has helped thousands of people find a meaningful way to achieve their financial goals. Goddesses and Adoni have fulfilled many dreams: new cars, new homes, vacations, friends, confidence and more time with their families. 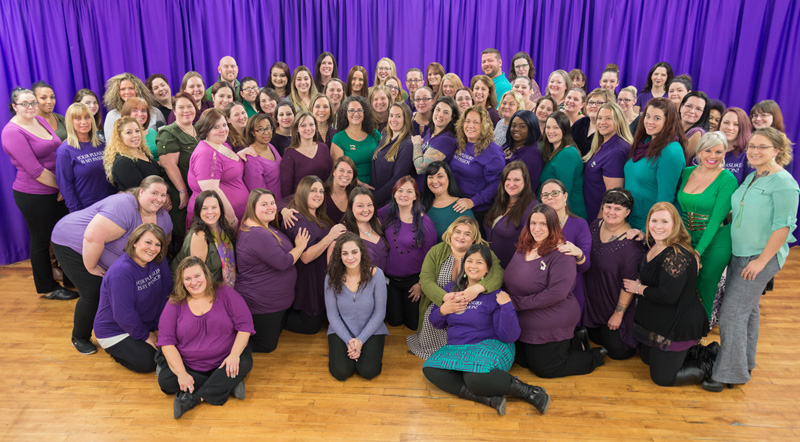 To empower all people through sexual education in a safe, comfortable environment while offering only the highest quality products presented by a trained Athena’s Goddess or Adonis. Athena’s Home Novelties’ ambitious charitable endeavor, The Athena’s Cup spent 10 years collecting unwanted bras from women all over the world.  In October of 2019, it was time to begin linking their 200,527 donated bras to create their record-busting chain!  On October 4, 2019, 1,000 boxes of bras were delivered to River’s Edge Sports Complex in Woonsocket, RI where this remarkable chain was constructed. Volunteers, aka HOOKERS, came together to raise breast cancer awareness and break the Guinness World Record for the most bras hooked together. This momentous project of hooking and linking each bra together had volunteers working tirelessly through the wind, cold, rain and a classic hard-driving New England Nor’easter storm.

To interview Jennifer Jolicoeur about working towards and achieving this impressive world record contact Athena’s Home Novelties, 1296 Park East Drive, Woonsocket, RI, 02895. The Athena’s Cup is a registered 501 (c) (3) charitable organization. The Athena’s Cup has no paid employees. All public relations, marketing, bra collecting, counting, and hooking have been supported by the generous time donated by Athena’s corporate staff, sales people and our family of volunteers.

At Athena’s, we feel that it is better to give than to receive. Since the company’s inception, Athena’s Home Novelties has made donations to many worthwhile organizations, some of which are included below. Please show your support by visiting the following organizations and making a contribution in the form of time, money, energy or efforts.

Ready To Get Started?

Join Now
We use cookies on our website to give you the most relevant experience by remembering your preferences and repeat visits. By clicking “Accept”, you consent to the use of ALL the cookies.
Do not sell my personal information.
Cookie SettingsAccept
Manage consent

This website uses cookies to improve your experience while you navigate through the website. Out of these, the cookies that are categorized as necessary are stored on your browser as they are essential for the working of basic functionalities of the website. We also use third-party cookies that help us analyze and understand how you use this website. These cookies will be stored in your browser only with your consent. You also have the option to opt-out of these cookies. But opting out of some of these cookies may affect your browsing experience.
Necessary Always Enabled
Necessary cookies are absolutely essential for the website to function properly. These cookies ensure basic functionalities and security features of the website, anonymously.
Functional
Functional cookies help to perform certain functionalities like sharing the content of the website on social media platforms, collect feedbacks, and other third-party features.
Performance
Performance cookies are used to understand and analyze the key performance indexes of the website which helps in delivering a better user experience for the visitors.
Analytics
Analytical cookies are used to understand how visitors interact with the website. These cookies help provide information on metrics the number of visitors, bounce rate, traffic source, etc.
Advertisement
Advertisement cookies are used to provide visitors with relevant ads and marketing campaigns. These cookies track visitors across websites and collect information to provide customized ads.
Others
Other uncategorized cookies are those that are being analyzed and have not been classified into a category as yet.
SAVE & ACCEPT

Please verify you are 18 years or older to enter.

WARNING ADULT CONTENT!
This website is intended for adults only and may contain content of an adult nature or age restricted, explicit material, which some viewers may find offensive. By entering you confirm that you are 18+ years and are not offended by viewing such material. If you are under the age of 18, if such material offends you or it is illegal to view in your location please exit now.